Bringing the Joy of the Gospel to the Halls of Carroll. Fr. Paul Dressler, Carroll Chaplain 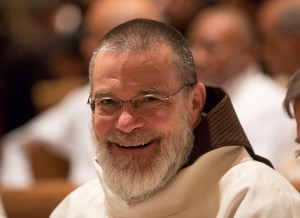 If you would have asked a 15-year-old Paul Dressler if he would be a Catholic priest in 2017, the answer would have been a quick no. The child of a Jewish father and a Southern Baptist mother, Fr. Dressler spent his formative years as a football player and a member of the wrestling team. During his junior year at Sherwood High School in Sandy Spring, Maryland, the Baptist Evangelical teen attended a retreat sponsored by the local Catholic Church of St. Peter's; this was the initial spark in his life of Catholic service. At age 17, he officially converted to Catholicism and chose to attend Mount St. Mary's College to pursue his degree while being immersed in the Catholic faith. During his collegiate years, he sensed his calling to priesthood, but continued to wrestle with the traditional familial path of life.
After graduation he immediately took a teaching and coaching (football) position at Good Counsel High School.Restless, he later packed his bags and traveled through Europe, returned to the United States to dabble in sales, and even returned to teaching at St. Vincent Palotti High School, before making the decision to enter into priesthood.Fr. Dressler entered the Capuchin-Franciscans in 1992 and was ordained in 1999 after receiving is Masters in Divinity from Washington Theological Union. Following his passion for working with young people, he served as a coordinator for young adult ministry in Philadelphia and now serves as the Guardian and Director of Formation at Province of St. Augustine, assisting friars to become priests. "The best way to describe what I do, is to call it a Life Coach for the friars here," he explained as he described how he helps friars through every step of their journey.While in D.C., Fr. Dressler alo assists St. Augustin's Church as a "help-out priest" on Sunday mornings. "It is the oldest African American Catholic church in the city, and I've been there happily. The worship service reminds me of the Baptist services I attended as a child with my mother," Fr. Dressler explained.Why Carroll? It's simple. "I have a love of teenagers, a love of African Americans, and a love of preaching the gospel," Fr. Dressler answered so passionately. It's is also a plus that he has "a tremendous respect for John Mudd." Ultimately, he is looking to "animate and invigorate" what is in place. "I am looking to work collaboratively with the spirited group of students and to enrich those in student ministry. I want to bring the joy of the gospel to the life of Carroll, and to encourage them to realize their identity in Christ." He closed by saying, "Know WHOSE you are. You belong to God, and you belong to each other."
Print