Kristin Jackson-Nesmith: From Carroll Lion to Dean of Students 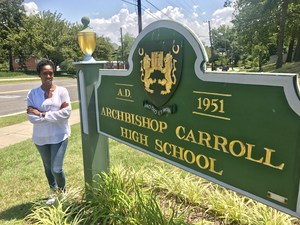 Who is a member of a championship Carroll basketball team, the former chair of the math department, and mother of a freshman Lion? Our new Dean of Students, Kristin Jackson-Nesmith.
In the fall of 1991, a young Kristin walked into the halls of Archbishop Carroll High School for the first time as a Carroll Lion. The daughter of a principal, Ms. Jackson-Nesmith was excited to attend the school of her choice. She quickly immersed herself in the newly co-ed school and became a member of the Lady Lions volleyball and basketball teams. She loved Carroll and the sense of community it provided. Her passion for volunteerism was nurtured by the many service opportunities that Carroll provides their students. School spirit ran through Ms. Jackson-Nesmith's blood, you could always find her at the football games and other spirit related events. During her senior year she was elected Senior Class Officer, and was an integral part of the Championship 1994 girls basketball team.
Ms. Jackson-Nesmith went on to get a degree from St. Peter's University in 1998 and made her first grand return to in 2004. "It was the social part of Carroll that drew me back," Ms. Jackson-Nesmith explained. She served a geometry teacher and the chair of the math department while earning her Master's in Educational Leadership from George Washington University. Ms. Jackson-Nesmith spread her wings and spent nearly ten years in public charter schools and at Don Bosco Cristo Rey High School before returning home.
In 2016, Carroll was reintroduced to someone who carries a deep love for Carroll in her heart. Ms. Jackson-Nesmith resumed her role as a math teacher. "I've never felt the way that I feel about Carroll, and I've never had more fun as an educator than when I've been at Carroll," she explained.
Ms. Jackson-Nesmith has officially accepted the role as Dean of Students, fulfilling her dream of being in an administrative role that is so closely connected to the students. She hopes to focus on improving the behavioral climate and expectations, "that is not always negative," she informed me. "It also means helping to restore that pride and that school spirit, and focus of the positive aspects of being in a school like Carroll." She will also be taking on another role at Carroll, Carroll parent. Her son made the choice to follow in the footsteps of his mother and become a Lion. In fact, he is currently a student in his mother's summer school math course! "Carroll is literally in every aspect of my life. My closest friends are from high school, or my time as a teacher at Carroll." The green and gold spirit that drives Ms. Jackson-Nesmith will continue to become an integral part of the students as she assumes her new role as the Dean of Students.
Print