63rd Commencement: The Final Farewell to the Class of 2017 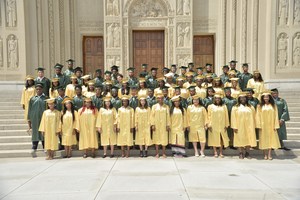 Hundreds of spectators rose from the pews of The Basilica of the National Shrine of the Immaculate Conception as the sounds of Edward Elgar’s Pomp and Circumstance filled the room. Seventy three seniors, donned in green and gold robes, were met with facial expressions of pride and excitement as they took their last steps as Carroll students. Two-by-two, the prospective graduates filed into their seats; boys in green on the left, girls in gold on the right. The kind yet commanding voice of President & CEO Beth Blaufuss reminded students in her Call to Order that, “our world is full of change,” and as products of Carroll, they should embrace and enhance the inevitable change that is upon us. She quoted the famous Robert Hoderny saying, “the world will not be saved by sixes or sevens,” as a reminder of the standard of excellence they are to adhere to as they go forth into the world.
Salutatorian Samuel Merga gave his address to the audience, noting that, “none of [his] accomplishments were achieved without prayer, and the grace of God himself.” The mighty voice of Mr. Roger Fairfax, Jr., Esq. ‘90, Chairman of Carroll’s Board of Directors, followed Merga to give greetings to the Class of 2017 on behalf of the board. Martha Serekeberhan’s soprano voice echoed as she performed her rendition of Ave Maria (Beyonce’ Knowles), leading to the presentation of awards to faculty and staff who made a difference in the lives of the senior class. Maria Caiza took the podium to give her Valedictorian Address, noting that her success would not have been possible had it not been for the support of her family. She took her seat just as the Carroll Choir approached the foot of the altar to sing Kurt Carr’s ‘For Every Mountain,’ a song of reflection on the protection God provides for His children.

The atmosphere was set perfectly for District of Columbia City Councilmember Robert C. White Jr. ‘00 to address the Class of 2017 as the official Commencement Speaker. He explained to the students that, “in life, there isn’t a finish line.” He spoke candidly about his setbacks in his formative years, and how Carroll transformed his life. “Don’t be afraid to fail, and take your social justice with you,” White proclaimed as he recalled his failed campaign. “If I followed my path, God would always catch me,” he explained while detailing the steps he took to secure his current position on the DC City Council. He ended his speech with the popular modern-revolutionary quote from Kendrick Lamar, “But if God got us, the we gon’ be alright,” and took his seat as the audience gave him a standing ovation.

The time finally arrived for the students to receive their diplomas. As the students made their way to their respective sides of the room, they were called one-by-one to receive their diploma and a handshake of congratulations from William H. Ryan III, Beth Blaufuss, Principal Katy Dunn, Mr. Roger Fairfax, Jr., and Vice Principal Elana Gilmore. After they returned to the wooden pews, the voice of Senior Class President, Kristian McKenzie, announced that they could finally turn their tassels. Following the benediction by Deacon Kenneth Lee, the Class of 2017 marched out of the building to Nathan Davy’s Toccata (Symphony V) as the newest alums of Archbishop Carroll High School.

Congratulations to all of the 2017 graduates!
Print