A Silver Celebration: Honoring Carroll's Greats for the Past 25 Years 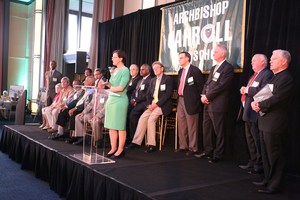 As the clock struck six on the evening of June 12, 2017, the doors of the John F. Kennedy Center for the Performing Arts Roof Terrace Restaurant opened. Guests presented their silver ticket to enter a hallway of gratitude to a handful of continuous donors. The friendly face of President & CEO of Carroll, Beth Blaufuss, greeted each attendee as they entered into the 25th Annual Spring Benefit. The first hour was filled with reconnecting with Carroll family over the sounds of The Exclusives, a live jazz band. Former classmates greeted each other with the classic, “I haven’t seen you in years,” and, “Do you remember…” that accompanies the reuniting of old friends. Many gathered under blue skies on the terrace that overlooks Washington, DC, and has a view of the Washington Monument in the distance. Chatter continued in between bites of salmon, steak, potatoes, and vegetables until two students took the stage to deliver When You Believe by Whitney Houston and Mariah Carey.
Father Mudd began the evening with a comical anecdote before presenting three current faculty members with the Griffin Award, an award bestowed upon the unsung heroes of Carroll. Judith Condezo, Sam Goines, and Megan Ver Duin individually received their award as their headshot was displayed on the screens around the room.

Fr. Mudd acknowledged the previous recipients of the Patrick Cardinal O’Boyle Medal before calling to the stage, Deacon Joseph F. Curtis ‘56 of the Basilica of the National Shrine of The Immaculate Conception. After thanking his family and friends for attending, Deacon Curtis recalled being gifted with a piece of art titled The Laughing Jesus and he went on to say, “Jesus has been laughing all of my life.” As the responsive chuckles from the audience subsided, he continued by saying, “He was laughing because of all the plans we make with our lives and Jesus compared them with the plans he had for our lives… and he’s been laughing through my career.” As photos from his days at Carroll flashed behind him, he recalled celebrating his 60 year reunion at the place where it all started, the halls of Carroll.

After a round of applause, Fr. Mudd gave a plaque of recognition to Matthew J. Dolan ‘78, Founder & CEO of Global Teaching Project as he was formally inducted to the Carroll Hall of Honor. He began by fondly remembering his high school basketball days, including defeating St. John’s for the WCAC Championship. Dolan even acknowledged two players on that defeated team in the audience, lightly poking fun at the decades old rivalry.

The final inductee into the Hall of Honor was Timothy F. Maloney ‘74, Principal, Joseph Greenwald & Laake, PA. Fr. Mudd spoke on his experience in state legislature and as a champion for social justice. Before he could deliver his acceptance speech, a special video greeting from his former college roommate, Governor Larry Hogan. As he received his plaque, he announced that he was celebrating his birthday that night. He also reflected on his time at Carroll and made the bold statement, “The spiritual framework that this school leaves is a part of the framework of each student, including myself.”

As Ms. Blaufuss concluded the evening before releasing the crowd to enjoy dessert, she spoke to the great strides Carroll has made thus far, and gave thanks to the Kennedy Center and Carroll staff that made the night possible. As bite sized carrot cake, chocolate mousse, and red velvet squares slowly left the serving platters, the live band cranked out tunes for the final hour of fellowship as the sun set. The once filled room dwindled as the 25th Annual Spring Benefit came to an end.
Print