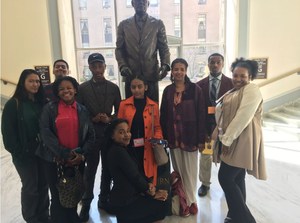 Walking in the treasured spirit of social justice, students of Carroll took their legislative concerns to the halls of Congress as a part of the Archdiocese of Washington High School Justice Days, sponsored by Pax Christi.
Pax Christi, a Catholic Peace organization, had a vision to bring together a group of all ethnicities, economic groups, and cultural backgrounds to unite on topics of importance to them. Of the high schools invited to coordinate the event, Carroll, Gonzaga, and Stone Ridge faculty and students responded to craft what resulted in a wonderfully informative and inspirational two days.

One of the first tasks of the planning team was to survey the Archdiocesan High Schools in order to find out what topics or issues were of most interest to them. Students on the planning team, one of whom was Adrienne Villenueva-Rodriguez a Carroll 11th grader, crafted a Google survey that was then distributed to collect student feedback. The results were that Immigration, Environment, and Racism were foremost on the minds of high school teens.

Armed with this information, the Justice Days took place on Sunday, April 2 and Monday April 3. Sunday's gathering provided information to those attending on Immigration and Environmental issues through the lens of Racism. Workshops were provided by Michelle Sardone of the Catholic Legal Immigration Network, Inc. (CLINIC) and Dr. Adrienne L. Hollis, Esq., Director of Federal Policy, along with Kerene Taylor of WE ACT Environmental Justice organization, during the morning sessions. In the afternoon, students received a Lobbying 101 session from which they then strategized for Monday's meetings with public officials. A closing Mass celebrated by Fr. Patrick Smith, Pastor of St. Augustine's Parish, ended the day in prayer and thanksgiving with the charge to continue to stand for what is right, speak truth to power and bring the kingdom of God to bear especially for those who are poor and marginalized.

Monday was exciting as students met with their respective representatives. Students who reside in the District of Columbia met with staff from Councilman-at-large Robert White's (ACHS Class of 2000) staff. Following this meeting, they traveled to Capitol Hill to meet with staff from Congresswoman Eleanor Holmes-Norton's office.

The day ended with a debriefing conducted at St. Peter's Catholic Church.
Print