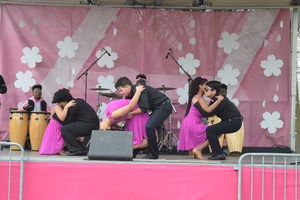 Our Leones de Oro Latin Dance Team added some Latin spice to the annual National Cherry Blossom Festival. On the 30th of March, the team took the Tidal Basin Welcome Stage to showcase Carroll's diversity and cultural acceptance through the art of dance. Most are more than familiar with the Salsa, Meringue, and the Tango, but few are as skilled at executing these beautiful, yet complex dance combinations as our Latin Dance Team. Donned in lilac pink dresses and black formal suits, the dance partners entertained a crowd of hundreds, just blocks away from the White House.
Sponsor and Coach Ms. Judith Condezo, says the team, "hit the ground running trying to put together presentations as the opportunities occurred" when the team was formed in 2013. Despite consistent growth and new members, this group of students remained dedicated to constantly reaching new heights in their craft. The Leones de Oro have taken classes from world class instructors that come to the city for dance conventions. In just four short years since their formation, the team has had the honor of sharing their passion for dance on a large scale by performing at Telemundo's Feria de la Familia at the DC Armory in 2015, opening for Grammy award winning singer La India, Omni Shoreham in 2016, and the Hispanic Heritage Month at the Kennedy Center in 2016.
Print