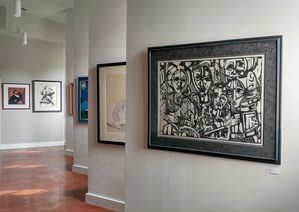 We are honored to be able to host pieces from world-renowned artist, David Driskell. Regarded as a pioneer in African American art, Driskell pushed the depiction of African American culture to the forefront of the art scene in his 1976 exhibit, “Two Centuries of Black American Art.” Receiving his undergraduate degree at Howard University, and his Master of Fine Arts at Catholic University, his combined personal and educational backgrounds provide him with a unique outlook on black religion and spirituality.

Titled, Faith and Justice, the collection as a whole draws on the strength and spirituality of the African Diaspora. Pieces showcase scenes from African weddings, working on the plantation, the Underground Railroad, the Jim Crow south, social gatherings and black churches. Biblical interpretations of the Magi, the journey to Egypt, and the Last Supper reinforce the source of the great strength that descendants from Africa drew from to overcome seemingly impossible circumstances. As our nation wrestles over the principles of justice and equality, it is fitting that Carroll houses and invites communities to experience the peace and strength of this exhibit. As a school dedicated to social justice, the artifacts allow Carroll to inspire tranquil reflections and conversations surrounding peaceful social action.
Print