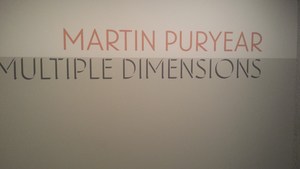 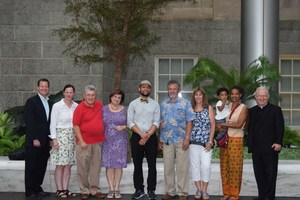 It was a special evening at the Smithsonian American Art Museum on Thursday, Aug. 11 for a group of Carroll alumni and staff. Led by Carroll Art Teacher Kyle Hackett, the group toured “Martin Puryear: Multiple Dimensions,” an exhibit featuring the work of Carroll alumnus Martin Puryear ’58, a widely celebrated visual artist.
“Martin Puryear: Multiple Dimensions” includes 72 objects, including 14 of the artist’s sculptures along with his earlier work of prints, drawings and sketches.
At the beginning of the tour Mr. Hackett explained, “We’re looking at a body of work spanning over forty years. We’re seeing drawings he made as a young man in the Peace Corps as well as sculpture he created as a well-known artist. It’s quite a span of time.”
Puryear is considered one of the top sculpture artists in the world. His objects and public installations—in wood, stone, tar, wire, and various metals—have been exhibited in numerous museums and galleries including the Museum of Modern Art, The National Gallery  of Art, Smithsonian American Art Museum, Solomon Guggenheim Museum, San Francisco Museum of Modern Art, and the Corcoran Gallery of Art, among others.
Two of Puryear’s Carroll classmates, Mike DeMouy '58 and Tom Slaughter '58, attended the exhibit tour. Mr. Slaughter recalled his Carroll classmate saying, “I remember he was someone who didn’t follow the crowd. He didn’t seem concerned with what the other students were doing. That was pretty unique.”
In his youth, Puryear studied crafts and learned how to build guitars, furniture, and canoes through practical training and instruction. After graduating from Archbishop Carroll in 1958 he earned a BA from Catholic University in 1963. Puryear joined the Peace Corps in Sierra Leone, and later attended the Swedish Royal Academy of Art. He received an MFA in sculpture from Yale University in 1971.
To learn more about “Martin Puryear: Multiple Dimensions”, click here. To view the exhibit’s online gallery, click here.
###
Print