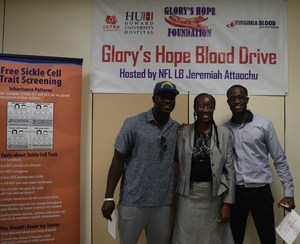 Carroll alum Jeremiah Attaochu ’10, currently a linebacker with the San Diego Chargers, hosted a blood drive on Monday, July 18 at Howard University Hospital. The event, held in conjunction with his foundation Glory’s Hope, the Sickle Cell Disease Association of America, Howard University Hospital and Virginia Blood Services, is the first annual blood drive hosted by Jeremiah and his newly created foundation, Glory’s Hope.
Jeremiah was inspired to create Glory’s Hope Foundation because of his sister, who has sickle cell disease. He says, “I think it’s important to bring light to the disease and educate people.”
Named after his sister, Glory’s Hope was founded to support research, education, and create awareness of sickle cell in the United States as well as in Africa.
Jeremiah hopes to encourage and empower everyone, but especially African Americans, to learn about sickle cell and donate blood. “Using the platform and the resources that I have in my current career, I want to let people know that they can get involved. An important and effective way to join the effort is by donating blood.”
To learn more about Glory’s Hope Foundation, visit: www.gloryshopefoundation.org.