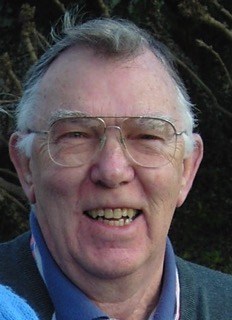 With sadness, the Archbishop Carroll High School community shares news of the death of John "Jack" P. O'Malley. Known to most as Fr. O'Malley, Jack served as an English teacher at Archbishop Carroll for 13 years (1954-1966) and returned to serve as Principal for the 1997-98 and 1998-99 academic years.
His full obituary can be found here.

John Patrick O’Malley died peacefully in his home at Burt Lake, Michigan, on June 12, 2016. He was 87 years old. His wife Margaret (Parlin) and two dogs, Ben and Chloë, were by his bedside.

Ordained as a Priest in the Order of St. Augustine in 1953, he served for 36 years in academic institutions founded and administered by the Order.

Known as Jack, he had a long and distinguished career in the academic arena in both administrative and teaching positions. Having earned his doctorates in philosophy and in education from Catholic University, and undertaking post-graduate education studies at the University of Pennsylvania, Jack held teaching positions at Catholic University; Salem State, Emmanuel, and Merrimack colleges; and Villanova, Saint Thomas and Widener universities.  The focus of his scholarship was administration and organization in higher education.

As an administrator in education since 1969 until his retirement in 1998, Dr. O’Malley served as Dean of Humanities at Merrimack College and Chairman of the Department of Education at Emmanuel College before being named Dean of the College of Liberal Arts and Sciences at Villanova University from 1978-1984. He was named Vice President for Academic Affairs and Provost at Saint Thomas University (Miami) and later Principal of Archbishop Carroll High School in Washington, DC. His last position was Associate Dean for the Center of Education at Widener University.

In retirement Jack continued teaching in continuing education programs in Connecticut and Northern Michigan with a primary focus on poetry.  During his years in Boston he developed college support for the desegregation of the Boston public schools in 1974-75. He served on many Boards of Trustees, being chairman of several of them.

Dr. O’Malley was the son of Thomas and Mary Alice (Mulvihill) O’Malley of Hoosick Falls, NY.  He is survived by his brother Bernard and his wife Rosemary of Hurley, NY. He was predeceased by his sister, Mary Reinfurt (Watervliet, NY), Thomas O’Malley (South Glens Falls, NY) and Edward O’Malley (Hoosick Falls, NY). He is survived by many loving nieces and nephews and his sisters-in law, (Kathy and Margaret), as well as his step-daughter, Nina (Hutchinson) Pruitt. He was predeceased by his step-son, Daniel Lovett Hutchinson, Jr.
###
Print