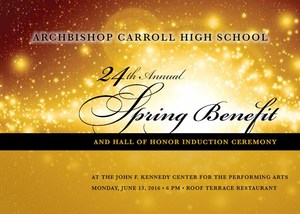 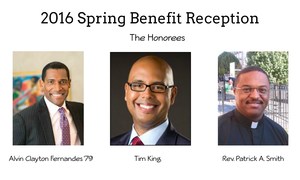 Alvin Clayton-Fernandes ’79 and Tim King will be inducted into Carroll's Hall of Honor during the 2016 Spring Benefit Reception on June 13 at The John F. Kennedy Center for the Performing Arts' Roof Terrace Restaurant. Inscribed in the Hall of Honor are those alumni who have brought honor to their alma mater, those who created a legacy for Carroll administrators and teachers, and those who partnered in our mission to develop future leaders in God’s work and community betterment.
The Spring Benefit reception will also feature the presentation of the Patrick Cardinal O'Boyle Medal to Rev. Patrick A. Smith, pastor of St. Augustine parish. The Patrick Cardinal O’Boyle Medal honors those who have worked in conjunction with the fundamental purposes of Archbishop Carroll High School, as outlined by its founder, Patrick Cardinal O’Boyle, which include: promoting Catholic identity, social justice, Catholic values and the fundamental belief in a government that understands the purpose that Catholic education serves in Washington, D.C.
Alvin Clayton-Fernandes ’79
Mr. Clayton-Fernandes has established himself as an influential painter, model and restaurateur.
After graduating from Archbishop Carroll in 1979, he went on to attend Mount Saint Mary’s University on a full academic and athletic scholarship. While his dream of playing professional soccer didn’t come to fruition, he has achieved major success in the fields of business, fine art and entertainment.
As a professional model with the Wilhelmina modeling agency in New York, Mr. Clayton-Fernandes has travelled all over the world and appeared in magazines such as GQ, Vogue, Vanity Fair, Esquire, Glamour and Self. Throughout the years, he has continued to accept modeling and acting jobs, but is living his passion as an acclaimed painter and the owner of Alvin & Friends, a popular restaurant in New Rochelle, New York that specializes in contemporary cuisine with Southern and Caribbean flavors.
Tim King
Mr. King is an educator, non-profit leader and founder/CEO of Urban Prep Academies, a nationally renowned network of all-male public charter high schools in Chicago, Illinois.
While a student at Georgetown University Law Center, Mr. King made the decision to pursue a career in education and began working at Archbishop Carroll High School. He fell in love with teaching, the school and the students, and eventually became a full-time teacher and a part-time law student. He served on the faculty at Carroll from 1990-1994.
After graduating from law school, he went on to become principal of a Catholic high school in Chicago before starting Urban Prep Academies. Mr. King has been recognized by a host of organizations and media outlets for his tireless leadership and service, and has become a sought after speaker and writer on issues related to urban education and philanthropy.

Rev. Patrick A. Smith
Father Smith serves as pastor at St. Augustine Catholic Church. He is a speaker, preacher, revivalist and retreat director for both youth and adults.
Fr. Smith was born in Washington, DC and attended local Catholic schools from elementary school through high school. After graduating from Mackin High School in 1981, he attended Mount Saint Mary’s University, where he majored in Theology. He was a student in college when he first discerned his calling to the priesthood.
Fr. Smith studied at the North American College in Rome, Italy, where he earned both a B.A. in Sacred Theology and a License in Sacred Theology. In 1990, he was ordained to the priesthood. Since then, he has served as a pastor at Our Lady of Sorrows Church in Takoma Park, St. Peter Claver Church in rural Southern Maryland, St. Teresa of Avila Church and St. Augustine Catholic Church, both in Washington, DC.

Join us in congratulating the honorees during our Spring Benefit and Hall of Honor Induction Ceremony on June 13, 2016 from 6pm - 9pm. For more information or to purchase tickets or sponsorships, click here.
###