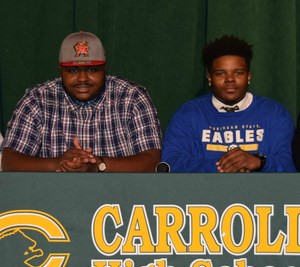 Several members of Archbishop Carroll’s football team made their college choices official on Feb. 3, National Signing Day. Three students signed National Letters of Intent to continue their athletic careers at Division I colleges and universities.
During a signing ceremony at Carroll, Richard Merritt ’16 (offensive guard) followed through on his commitment from December and signed with the University of Maryland. Jerome Brooks ’16 (linebacker / fullback) signed with Morehead State University.

Jauan Williams ’16 (offensive tackle), made his announcement on live television via CBS Sports. He has chosen to play for Florida State University.

Robert Harris, Carroll’s head football coach said “I would like to congratulate Richard Merritt, Jauan Williams and Jerome Brooks on this great accomplishment of signing and committing to the University of their choice. This is just another “great” for these three, fine young men!”

This is the second signing ceremony held at Carroll this school year. In November, the school celebrated the signings of track and field athletes Stedman Cook ’16 (University of Connecticut) and Maxwell Willis ’16 (Baylor University). A third wave of Carroll student athletes are expected to announce their college plans next month.

We are excited about the achievements of all of our student athletes and wish them much success in the future.