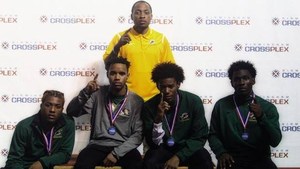 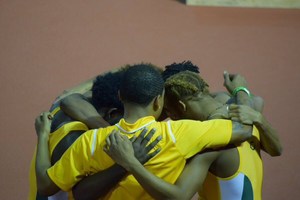 After stellar performances on Jan. 9 at the Ice Breaker Invitational in Birmingham, AL, Carroll’s track and field team is making waves nationally. A bit of history was made when the boys' 4x200m relay team, consisting of Stedman Cook ‘16, Kendall Leach ‘16, Justin Davis ‘16 and Maxwell Willis ’16, ran a time of 1:27.54 (currently US#1 and US #12 All-Time), achieving a new Ice Breaker Invitational meet record, new Birmingham Crossplex facility record and a new school record!

In recognition of their tremendous achievements, the boys' 4x200m team was voted MileSplit USA’s National Performer of the Week. You can watch the race video by clicking here.

The members of Carroll’s relay team believe their training is beginning to pay off. Although they are extremely pleased with their performance, they have their sights set on accomplishing much more, including solidifying their standing as one of the best teams in the country.

Trent Edgerton ‘08, head coach of the track & field program, has big aspirations for the team. He says, “With the talent that we have, I want to be able to showcase our team nationwide and gain exposure for the school.”

In addition to the 4x200m team, results at the Ice Breaker Invitational consisted of top overall finishes and many more personal best performances from members of Carroll’s track team. Here are some highlights:

* The boys' 4x400m team, consisting of Stedman Cook, Kendall Leach, Justin Davis and Maxwell Willis, finished 1st overall with a time of 3:26.09, which was a new Ice Breaker Invitational meet record. The 4x400m team is currently ranked fifth in the nation.

Coach Edgerton feels this is just the beginning. He says, “These guys are hungry and they're humble. As long as they stay healthy and focused on the plan, then big things can be accomplished.”