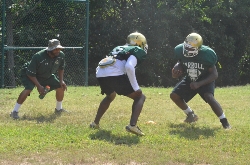 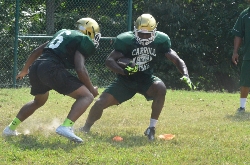 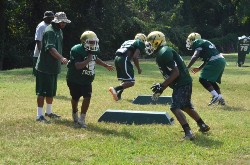 This school year, Archbishop Carroll is unveiling a new football program, rebuilt from the ground up. Some changes are quite visible – new coaches, new uniforms, new systems on offense and defense – while others are more subtle, like increased discipline, better teamwork, and strengthened character among student athletes.
Robert Harris ‘91, who took over as head coach last January, says, “Some of our program’s successes may happen sooner than later, but we’ve already made progress and put ourselves in position for a good season.”

The first step in rebuilding the program was hiring a dedicated coaching staff that shares Coach Harris’ vision and goals, which include creating a family environment within the program, restoring JV and freshman teams, growing alumni support, and winning games.

A cadre of 15 coaches makes up the staff. Several, including Coach Harris, are Carroll alumni who know what it feels like to wear green and gold with pride:

Building well-rounded student athletes is a top priority for Coach Harris and his staff. And he has received a tremendous amount of support from Carroll staff, administrators, and parents.

Athletic Director Torrance Hill says, "Our transition with head coach Robert Harris and the returning football players has been a positive on the field and off."

Jerome Brooks ’16, a middle linebacker and fullback, says “Coach Harris is different from a lot of other coaches. He doesn’t just teach you about football. He teaches you about life and how to be a man.”

A summer of intense training

Many of Carroll’s football players were on campus for much of the summer, building muscle in the weight room, stretching, and performing a variety of cardio exercises. Getting acclimated to a totally new system on offense, defense, and special teams was also a significant part of summer training.

In early June, Coach Harris organized Carroll’s inaugural 7 vs. 7 football tournament that brought eight high school teams from DC and Maryland together for a daylong competition held at fields at both Carroll and Catholic University. The Lions performed well, finishing in 3rd place with a 4-3 showing for the day.

Linebacker and tight end Tyreek Ransome ’16 says, “Getting used to a new coaching staff and new teammates was a process all of us on the team went through together over the last few months.” And he now notices a difference in the team’s work ethic.

Noah Duque ’16, a wide-receiver and defensive back, sees, hears and feels a different level of camaraderie amongst teammates this season. “Coach Rob [and staff] brought a new feel to the team. I like it a lot. We’re like a family. We trust and support each other.”

Throughout the summer, practices were intense, but remained exciting and spirited for students on the varsity team and the newly formed JV team; all are hungry to succeed. With training sessions that were fast-paced and up-tempo, members of both teams feel prepared to compete at a high level during games.

“We’re taking the phrase and we’re running with it,” says Coach Harris.

He is referring to “Restore the Roar”, a phrase referencing Carroll’s rich athletic legacy that includes 16 football championships, seven undefeated seasons, and life-long individual and team experiences for thousands of alumni. It is a call-to-action that encourages students to learn about Carroll’s history, traditions, and the successes of people who have walked the halls as students and staff over the last 64 years. The underlying message challenges current students to become a part of the legacy by building on it.

So how will we know once the “roar has been restored”?

Come out and support the Lions in their first home game of the season on October 3 at 2:30pm, when the team takes on Bishop McNamara. Click here to view the football schedule, roster, game stats, video highlights, and more.