National Symphony Orchestra Members and Guest Musicians Perform at Carroll During NSO in Your Neighborhood: Brookland to NoMA 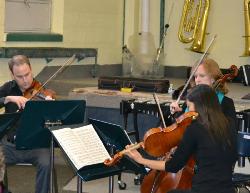 On January 7th and 8th, Archbishop Carroll welcomed National Symphony Orchestra members and other guest musicians to Carroll for three special in-school performances. The events were part of this year's NSO in Your Neighborhood: Brookland to NoMA, a week-long initiative presented by the Kennedy Center for the Performing Arts, which brought free chamber music and orchestral concerts to neighborhoods throughout Washington, DC – from Brookland to NoMa.
Fine Arts Department Chair and Band Director Alyssa Montchal, who spearheaded the effort to bring the musical performances to Carroll said, “I hope that our students learned that classical music is not dead, that it is ever-evolving. They can put their spin on something that is old and make it new.”

Students enjoyed a school-wide performance on January 7th that focused on the connection between hip-hop and orchestral music. Musicians Glenn Donnellan (electric bat-violin), Christylez Bacon (beat box) and Wytold (electric cello) explained the origin of their unique instruments and how they produce a multiplicity of sounds. Christylez led the performance and shared personal stories of discovering his love of music and his talent for beat boxing – the art of producing vocal percussion sounds with one’s mouth. The three performed several tunes including “It’s the Beatbox”, which blended beat box with portions of Pachelbel's Canon in D, and "Bach Remix", a remix of Bach's Prelude to Cello Suite No. 1 in G Major.

These performances were a special treat for the Carroll community. Students were thrilled to participate in this year's NSO in Your Neighborhood and experienced firsthand the magnificent impact of music!

Click here to learn more out about NSO in Your Neighborhood: Brookland to NoMA.