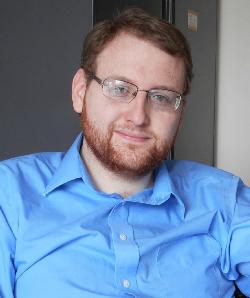 Dr. James Watts, who joined the faculty in January, wants students who take his class to think critically, especially about things that may appear to be true. As a forensic science teacher, he hopes his class sparks their interest in science and fuels a lifelong curiosity.
“I do some traditional lecturing, but I always try to engage the students as much as possible," he says. "We’ve been doing a lot of labs in class where we start off by learning the idea behind a principle and then putting a name to the principle. This enables students to use critical thinking skills, rather than simply memorizing facts.”

Dr. Watts looks forward to exploring various topics in depth with his students. With the resurgence of crime dramas on television, he finds that students are eager to learn how evidence is analyzed in real life. And yet, he believes television shows from decades past are often more realistic in portraying forensics than many contemporary shows. He shares, “Our first unit in class has focused a lot on how TV science is portrayed versus real forensics. We watched the pilot episode of Quincy [from 1976] and the students completed a questionnaire to compare how evidence was presented on the show and how it is done in a real case.”

Although he has a passion for science, he knows that critical thinking skills will serve students in whichever career field they choose as well as in their own personal development. He offers guidance by encouraging students to take stock of themselves by asking: What goals do I want to achieve? Why do I want this? What specific things do I need to do to achieve my goals? What am I willing to sacrifice? He believes an honest self-assessment is a crucial exercise for students as they prepare for college.

In addition to teaching at Carroll, Dr. Watts is an adjunct professor at Howard Community College. He is originally from Fayetteville, Georgia, and earned a B.S. in Chemistry from Spring Hill College and a Ph.D. in Physical Organic Chemistry from Florida State University. Dr. Watts is also a fiction writer with several novels under his belt. Currently, he is working on a quasi-crime thriller!