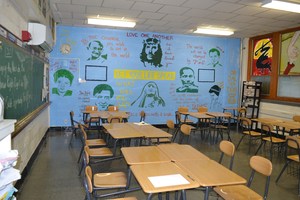 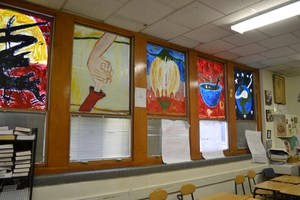 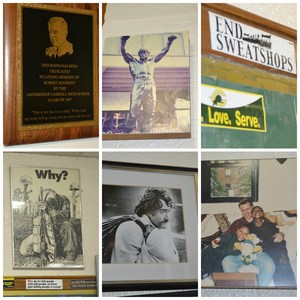 Room 325 is where social justice began at Carroll. It’s the classroom once occupied by Mr. Robert Hoderny, one of Carroll’s most legendary teachers. Although his life was tragically cut short in 1996, his spirit lives on at Carroll in many ways — from the social justice course to the annual food drive to soup kitchen volunteer service.
Among the many tributes that have been created to honor him, Room 325 serves as one of the most powerfully tangible ones.

Social justice teacher Julie Demareo teaches in Room 325. She says, “A lot of alumni who visit the school, come back to this room and say ‘Can I just stand here for a few minutes?’ It’s their special way of remembering him.”

The mural on the wall in Room 325 was painted in the summer of 2013 as another way to honor Mr. Hoderny’s legacy. Created by Megan O’Hara, a former social justice teacher, the mural highlights some of the heroes that students study during their social justice course at Carroll – Jesus, Mother Teresa, Mahatma Gandhi, Rosa Parks, Cesar Chavez, Martin Luther King, Jr. and Dorothy Day. Most fitting for the mural in Room 325, is that it includes Mr. Hoderny and two quotes that he was known for saying:  “The world will not be changed by 7s or 6s” and “Woof”.

There are many things in Room 325 that Mr. Hoderny put up himself, that remain in honor of him. The painted windows are the most striking example. They were newly installed when he was a teacher, and one day he decided to leave his mark by painting them. Each window tells a story about things that deeply moved him: Miss Saigon, a helping hand, the story of the onion, the soup kitchen, and the arc of justice. While some of the administrators may not have been happy about it at the time, the artwork on the windows has remained untouched since.

Along one side of the classroom, there are bumper stickers affixed to the wall. Each echoes his philosophies on topics such as peace and justice. On another wall, there are enlarged photographs of people like homeless rights advocate Mitch Snyder, a friend and cohort working on the issues that Mr. Hoderny challenged his students to learn about. Near the windows, there is an enlarged photograph of Mr. Hoderny holding his two adopted sons. It captures perfectly the essence of him as a devoted father. Above it, hangs a photograph of the Rocky statue, an homage to “the underdog” that he championed.

Room 325 serves as a reminder of Mr. Hoderny’s challenge for all of us to do more, think big and act big when confronting the social justice issues of our time. The Carroll community strives to carry on Mr. Hoderny’s legacy every day. And the things he left us, tangible and intangible, help us to continue his mission of changing the world for the better.