Musical Theatre Returns to Carroll with the Production of “You’re a Good Man, Charlie Brown” 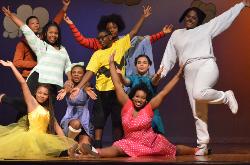 Musical theatre returned to Archbishop Carroll in March with the production of the Tony award-winning Broadway musical “You’re a Good Man, Charlie Brown”.
The entire Fine Arts department worked extremely hard on the production; from a student-based pit orchestra conducted by Ms. Alyssa Montchal, to Mr. Matthew Wallace's art students supporting the set construction. In the end, all of the hard work paid off. The students delighted audiences during three stellar shows.

Carroll’s Theatre Program is in its third year of revitalization, under the leadership of drama and choir instructor Michele Vicino. Ms. Vicino says, “Having prepared a foundation of drama classes during the school day, after school workshops, trips to see live theatre, partnerships with The Catholic University of America’s drama and music departments, we are now in a great position to put on this type of production. This was an important moment for the theatre program; it was the first Broadway musical the school has presented in decades.”

“You’re a Good Man, Charlie Brown” is a revival of the 1967 classic, which is based off of the Peanuts comic strip featuring the lovably quirky characters Charlie Brown, Sally, Linus, Lucy, Schroeder and Snoopy.

Shawn Herrington ’18, who played the role of Charlie Brown, says the experience helped him acquire new skills as a performer. “My favorite part of being in the show was the dancing. I never knew how to dance until now.”

The cast, made up primarily of freshmen, featured students with varying levels of acting experience. Nonetheless they rose to the challenge, collaborating with one another, putting in hours of rehearsal a day, and taking part in actors' homework, such as scene study, research, and line-memorization.

Being part of a musical production, and bonding with fellow castmates and crew, made this a special time that students will never forget. For Nyjah Smith ’17, who played the role of Peppermint Patty, the experience helped her develop skills that will benefit her in other areas of life. “I really learned how to work with people. It was good for me to be able to practice temperance and patience.”

Each year the spring production is the final performance for seniors, who most often describe the experience as bittersweet. Assistant stage manager Taira Comfort ’15 says, “As a senior, this was my last show, so it was a little sad for me. But I’ve learned so much with each production, whether I’m performing on stage or behind the scenes. I’m going to take everything that I’ve learned and use it to help me achieve my goal to act and sing professionally one day.