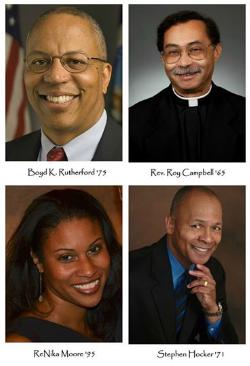 Steve Hocker '71, ReNika Moore '95, and Boyd Rutherford '75 will be inducted into Carroll's Hall of Honor on June 8 at The John F. Kennedy Center for the Performing Arts Roof Terrace Restaurant. The evening will also feature the presentation of the Patrick Cardinal O'Boyle Medal to Rev. Roy Campbell '65.
Inscribed in the Hall of Honor are those alumni who have brought honor to their alma mater, those who created a legacy for Carroll administrators and teachers, and those — who by their benevolence — partnered in our mission to develop future leaders in God’s work and community betterment.  The Patrick Cardinal O’Boyle Medal honors those who have worked in conjunction with  the fundamental purposes of Archbishop Carroll High School, as outlined by its founder, Patrick Cardinal O’Boyle, which include: promoting Catholic identity, social justice, Catholic values and the fundamental belief in a government that understands the purpose that Catholic education serves in Washington, D.C.

Boyd Rutherford ’75 was sworn in as Lieutenant Governor of Maryland on January 21, 2015. As Lieutenant Governor, he is the second highest elected official in the state. Rutherford is now the third African-American to be elected to state-wide office in Maryland. (Carroll alumnus Michael Steele '77 was the first in 2003).

After graduating from Carroll, Rutherford earned his Bachelor's Degree in economics and political science from Howard University, and J.D. and Master's Degree in communications management from the University of Southern California.

Although Rutherford had never previously run for elective office, he served as Assistant Secretary for Administration for the U.S. Department of Agriculture from 2001 to 2003 and Secretary of the Maryland Department of General Services from 2003 to 2006 under Governor Robert Ehrlich.

Boyd and his wife, Monica, have been married for 27 years and have three adult children.

One of three Hocker brothers to attend Carroll, Steve is the past President/CEO of Special Olympics District of Columbia.

He is a three year varsity letter-winner (basketball) at St. Bonaventure University, graduated in 1975, and then returned to Carroll to teach English and help coach the football and basketball teams. One year later, he went to Mackin High as the youngest head varsity basketball coach in the D.C. area.

When he took over the Special Olympics in DC, the program was serving 900 children. Today, the program serves 2,000 children and adults with intellectual disabilities.  Other accomplishments at Special Olympics include developing innovative corporate partnerships, growing participation among athletes and supporters, establishing the Night of Trees annual gala, creating a campaign to end use of the “R” word, and cultivating relationships with hundreds of local community groups, schools and universities on behalf of Special Olympics DC.

After spending three decades in the retail banking industry, Rev. Roy Campbell discerned his true calling – priesthood. Today, he is pastor of Saint Joseph Catholic Church in Largo, MD, where he has served since 2010.

After graduating from Carroll, he attended Howard University and then the University of Virginia. For 33 years, he enjoyed a career at Bank of America, working his way up from teller to vice president and project manager. He also served for five years on the Board of Directors of the American Lung Association of Maryland in the 1980s.

After making the decision to become a priest, Rev. Campbell obtained a Master of Divinity (M.Div.) in Theology & Theological Studies from Blessed John XXIII National Seminary. He officially joined the priesthood in 2007. In addition to Saint Joseph’s, he has served in a number of parishes, including Assumption, Immaculate Conception, and St. Augustine.

Ms. Moore has spoken and written extensively on economic justice issues, including disparate impact theory in employment and housing discrimination cases, use of criminal records and credit history checks in employment, and the causes of the subprime mortgage crisis.

Join us in congratulating the honorees during our Spring Benefit and Hall of Honor Induction Ceremony on June 8, 2015.