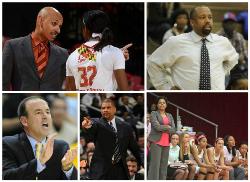 Being head coach of a collegiate basketball team is a golden opportunity few get to experience. Which is why the Carroll alumni who are currently making a name for themselves coaching on the hardwood make us so proud...
Marlin Chinn ‘88 was named head women's basketball coach at Florida International University (FIU) on April 8. Chinn recently completed his sixth season as an assistant coach at the University Maryland, where he helped lead the Terrapins to a 34-3 record last season. During his time at Maryland, he helped guide the team to a Big Ten Championship title, a No. 1 seed in the 2015 NCAA Tournament and a Final Four appearance. Prior to that, Chinn coached at Seton Hall, where he spent three seasons as the Pirates' top assistant and recruiting coordinator.

On April 28, Lester “Jay” Butler, Jr. '92, was named head men's basketball coach at Virginia Union University (VUU). As a VUU point guard in the 90s, he helped lead the school to three CIAA championships and four Division II NCAA tournament appearances. Butler spent the last eleven seasons as the women’s basketball coach at the University of the District of Columbia. His UDC teams have captured two Independents Collegiate Athletic Association (ICAA) national championships and made three Division II NCAA Tournament appearances. Coach Butler has twice been recognized as ICAA Coach of the Year.

We wish all five continued success. We will be cheering for them!