After Achieving Success Locally, Members of the Track Team Head to Nationals 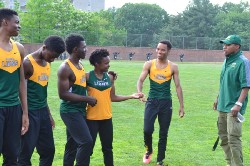 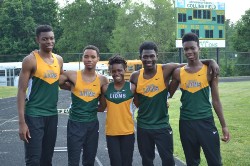 Congratulations are in order for Archbishop Carroll’s track team. After working hard all season, the team is now enjoying some impressive results.
At the WCAC Outdoor Track & Field Championships held last month, Stedman Cook '16, Kendall Leach '16, Nicholas Orji '15 and Ethan Fogle '18 finished in 1st place in the 4x400 meter relay; Julian Nelson '15 placed 2nd in the shot put and discus events; and Stedman Cook '16 earned 2nd place in the 100 meter event. Not to be outdone by the boys on the team, Kemi Maye '16 had an outstanding performance of her own, winning the individual championship in the 300 meter hurdles.

Four members of the team performed so well at the WCAC Championships that they qualified for nationals. From June 19-21, students from Carroll will compete in the New Balance Outdoor Nationals at North Carolina A&T in Greensboro, NC.

Trent Edgerton, who has been at the helm as head coach of the track team for the last two years, is excited to see how the students have progressed. “Getting to nationals has been our big goal all year. We want to be the best that we can be, not just locally but on a national scale. So when we began practice for track season last August, we began preparing for this very moment.”

A few members of the track team recently shared some of their thoughts on their success this season and what they hope lies ahead in the future:

Stedman Cook ’16
Stedman attributes the team’s success to “teamwork, being consistent, and coming to practice.” After nationals, he intends to continue working hard, and hopes to achieve even bigger things in the future, including receiving a college scholarship from one of his top five school choices.

Kendall Leach '16
Kendall believes he and his teammates are heading to nationals because of their trust and confidence in one other. Kendall says, “We didn’t run scared, we didn’t second guess ourselves. We know what we can do.” Next season, his goals are to improve his race times, win a state title and get recruited to run in college.

Ethan Fogle '18
Ethan knows the meaning of hard work. It’s what got him and his teammates this far. At nationals, his goal is to win the Freshman 400 event. With hard work and dedication, he knows he can achieve whatever he puts his mind to.

Kemi Maye '16
At 5 feet tall, people always told Kemi she was too short to run hurdles. She proved them wrong by winning 1st place at the WCAC Championships this season. Although her race times didn’t qualify her for nationals, she's proud of her accomplishments, and is now setting her sights even higher for the future. She wants to run track in college, and her ultimate goal is to make it to the Olympics.

Going into next season, Coach Edgerton wants to see the program continue to grow. “One of our overarching goals is to be a bigger program in depth, both on the girls’ side and the boys’ side. I think our success this season will help us get more students on the track team. I really look forward to seeing what we can accomplish in the years to come.”