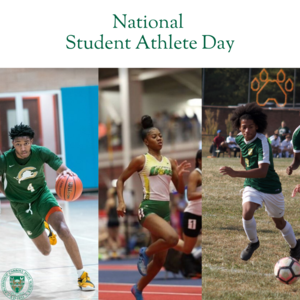 WASHINGTON, (April 6, 2020) Archbishop Carroll High School, a Catholic school in the Archdiocese of Washington, today celebrated National Student Athlete Day by honoring the academic and athletic accomplishments of their student-athletes.

“I am proud of the accomplishments of our talented student-athletes. The combination of a strong college prep academic regime coupled with competing in an elite athletic league within a talent filled location has made Archbishop Carroll a favorite recruiting destination for intercollegiate athletic coaches in both girls and boys sports of all levels,” said Archbishop Carroll Athletics Director Brian Ellerbe.

Senior student-athletes who have received athletic scholarships include:

National Student-Athlete Day (NSAD), observed annually on April 6, provides an opportunity to recognize the outstanding accomplishments of student-athletes. National STUDENT-Athlete Day was created by National Consortium for Academics and Sports (NCAS) to honor high school and college student-athletes who have excelled in academics and athletics and who have contributed to their communities and schools in a significant way.The program seeks to encourage families, schools and communities to support their STUDENT-athletes in their endeavors. Support student-athletes and use #StudentAthleteDay.

Archbishop Carroll Athletics competes in the WCAC, one of strongest and most respected athletic conferences in the nation as well as DCAA, which is made up of public schools, DC private schools from various conferences such as the WCAC and the MAC, and DC charter schools. The department fields both Varsity and Junior Varsity Girls and Boys Teams in 8 sports in addition to a Championship eSPORTS Program. For more information on team schedules and rosters click here or visit carrollathleticsdc.org.

Archbishop Carroll High School, under the leadership of President Larry Savoy '93 and Principal Elana Gilmore, is a Catholic, college preparatory, co-educational school in the Archdiocese of Washington that welcomes young people and empowers them in an academically rigorous, diverse, and supportive learning environment. Established in 1951, Archbishop Carroll led by example as one of the first D.C. schools to defy segregation three years before the landmark civil rights Supreme Court case Brown v. Board of Education declared it unconstitutional. In 1989, Cardinal Hickey, the Archbishop of Washington, ordered three diocesan high schools merged into Archbishop Carroll, All Saints, Holy Spirit, and Mackin. In doing so, he created a legacy at Archbishop Carroll in three primary ways: by expanding its inclusive mission by enrolling women as a co-educational institution; by maintaining a consistent call for Catholic institutions to serve others; and by calling Archbishop Carroll to effective financial stewardship. Today, Archbiship Carroll continues to honor its legacy as a place where all students can know, love and serve God. Archbishop Carroll is one of 93 Catholic schools in the Archdiocese of Washington located across the region in Washington, D.C., and five Maryland counties. Learn more at archbishopcarroll.org.