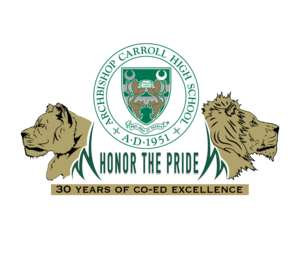 WASHINGTON, (October 9, 2019) Archbishop Carroll High School, a Catholic school in the Archdiocese of Washington, today celebrated its decision to become a coeducational institution thirty years ago in the 1989-1990 school year.

“Thirty years ago, I began my journey at Archbishop Carroll as a member of one of the first co-ed classes and I am proud to reflect on the accomplishments of my female classmates who broke the mold and became the first women to boldly represent this great institution,”said Carroll President Larry Savoy. “Today, we honor the pride that was instilled in us thirty years ago by passing on the legacy of greatness to the next generation through our sons and daughters.”

The inaugural class of women, admitted in 89-90, ushered the school into a new era helping to shape Carroll in their own unique ways and by establishing the foundation for female students to leave indelible marks on athletics and academic achievement. They passed on the legacy of pride that continues to live on in current faculty and parents.

“To have my children walk the halls that I walked and have the same teachers I had... I feel like I am giving my kids a piece of my history. It’s one of the most meaningful things I have been able to share. My children are my legacy and they are now a part of my alumni family too,” said Carroll alum and legacy parent Geva Hickman-Johnson ‘93 whose daughter Angel is in the class of ‘20.

“It feels awesome to keep the tradition going through my daughter. I feel very proud. and when you have pride you have everything,” said Erin Roxborough ‘92 whose daughter Alanna is a current student graduating in the class of ‘23.

In 2019 women at Carroll continue to honor the pride through leadership and academic excellence. Women faculty and administration hold 67 percent of leadership roles. Eighty-seven percent of Carroll students inducted into The National Honor Society are women.

Archbishop Carroll High School is a Catholic, college preparatory, co-educational school in the Archdiocese of Washington that welcomes young people and empowers them in an academically rigorous, diverse, and supportive learning environment. Established in 1951, Archbishop Carroll led by example as one of the first D.C. schools to defy segregation three years before the landmark civil rights Supreme Court case Brown v. Board of Education declared it unconstitutional. In 1989, Cardinal Hickey, the Archbishop of Washington, ordered three diocesan high schools merged into Carroll, All Saints, Holy Spirit and Mackin. In doing so, he created a legacy at Carroll in three primary ways: by expanding its inclusive mission by enrolling women as a co-educational institution; by maintaining a consistent call for Catholic institutions to serve others; and by calling Carroll to effective financial stewardship. Carroll continues to honor its legacy as a place where all students can know, love and serve God. Archbishop Carroll is one of 93 Catholic schools in the Archdiocese of Washington located across the region in Washington, D.C., and five Maryland counties. Learn more at archbishopcarroll.org